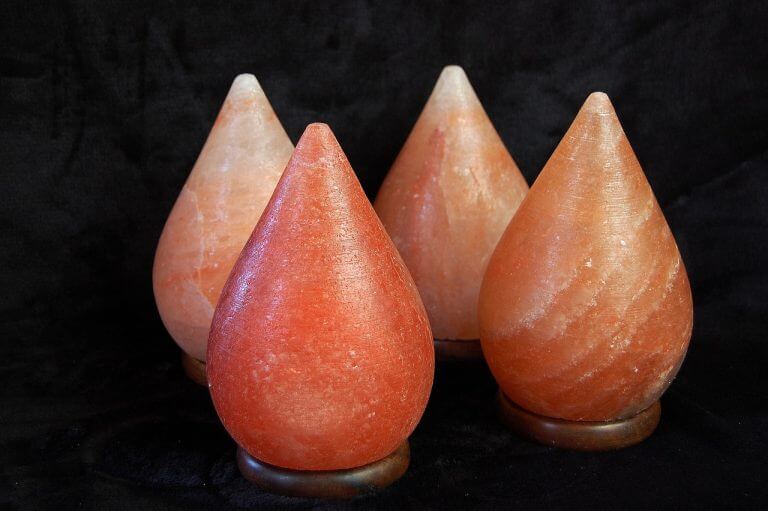 Himalayan Salt Lamp – what do they do, how do they work, and what are the benefits of using one?

What does a Himalayan Salt Lamp do?

Himalayan Salt Lamps are becoming more popular with many people using them to improve their wellbeing and enhance their day to day lives. But what does a Himalayan Salt lamp do? It is believed they can purify the air which helps boost your mood, ease allergies, and they may even help you with a good night’s sleep.

How do they work?

There are many versions of salt lamps on the market but they all work in the same way.

A large piece of Himalayan pink salt is sculpted and hollowed so that it can encase a low wattage bulb.  When connected to a power supply the bulb emits a pleasant glow through the salt block.

When warmed the salt lamp releases negatively charged ions which water droplets that occur naturally in the air are attracted to.  When these water droplets land on the surface of the gently warmed salt lamp they evaporate and form ions.

Let’s look at positive and negative ions, which you can’t see, touch or smell, but they are all around us.

Our homes are full of pieces of electrical equipment that release positive ions.  Think of things like TVs, computers, digital devices, heating systems, and air conditioning units.  Each time ions are released it creates an electrical imbalance in the air around us.

Negative ions are molecules which are electrically charged.  They are found in nature such as near waterfalls and large bodies of water, ultraviolet light from the sun, after lightning or thunderclaps.

The salt lamp uses the difference between these ions to produce one single negative ion which helps adjust the imbalance in the air around you.

There are also candle holders and incense diffusers made from Himalayan salt which release light, scent and negative ions when gently heated.

There are many who believe that using Himalayan salt lamps is good for both the individual and the environment in which the salt lamp is placed. At this stage we must point out that there is no specific medical or scientific research on this subject at the moment and you should therefore make up your own mind on the subject. So let’s look at some of those claims in a bit more detail.

They improve your well-being

When the salt lamp is gently heated it ionises the air around it. It is believed this removes the positive ions from the air and replaces them with negative ions.

Whilst more scientific research needs to be carried out to verify the claims made regarding the health benefits of salt lamps, it is recognized that negative ions are found in large quantities around oceans and waterfalls which could help improve mood and state of mind.

They increase your energy levels

The negative ions that replace the positive ions are believed to help boost how you feel.  It is suggested that it will leave you feeling revived and refreshed with increased energy levels.

When the salt lamp warms up the heated salt surface it releases negative ions which attract the positive ions floating in the air.  This means the salt lamp is acting as an air purifier.

Since the salt lamp acts as an air purifier it is believed that the cleaner air can help with respiratory problems, such as asthma and other lung conditions.

It is believed placing a salt lamp in a bedroom can help improve sleep.  The cleaner air allows the body to relax and breathe easier – it may even help with those who snore.

Ever been to a spa, or retreat, where the moment you walk through the door you relax and experience a feeling of calm?  Well, by strategically placing salt lamps throughout your home, office, retreat, or wellness location, you too can enjoy discovering the benefits of using Himalayan salt lamps.

Side effects of salt lamps

The simple answer is – there are currently no listed side effects of humans using salt lamps.

However there are practical issues you should carefully consider, such as:

Are Himalayan Salt Lamps safe for cats, and dogs? Cats, and dogs, are inquisitive creatures and will naturally check out new things that appear in their home. If you are intending on getting a salt lamp, and you own a pet, you need to give careful consideration to where you are going to place it as it could be hazardous to your pet.

If your pet does lick the surface of the salt lamp once or twice that may be okay, but they could get a liking for it which could be potentially fatal.  If your pet continues to lick the salt lamp you should watch them carefully and get immediate veterinary assistance if they suffer from:

Every product we purchase has its benefits and negatives, and Himalayan Salt Lamps are no different.

As homeowners look at ways to improve their personal surroundings there has been a huge increase in salt lamp sales, unfortunately this has resulted in counterfeit products coming onto the marketplace.

When considering your purchase of a Himalayan Salt Lamp look at areas such as:

How to clean Himalayan Salt lamps

Salt lamps will require the odd bit of attention – but not too much.  They can attract the everyday dust and debris that floats around your home and will therefore benefit from a quick dust now and then.

Have a look at the following article to see how to maintain and operate your Himalayan Salt Lamp.

Whilst there is no clear scientific evidence to prove that salt lamps work, there is also little evidence suggesting that they don’t.

There are many people who believe in the therapeutic effects of using salt lamps as well as the many health benefits previously mentioned. I guess it may be best to classify the salt lamp under the ‘alternative therapy’ category, and regard it as a positive thing to use, but without any proven science behind it.

If you would like to read more articles on salt then pop on over to: